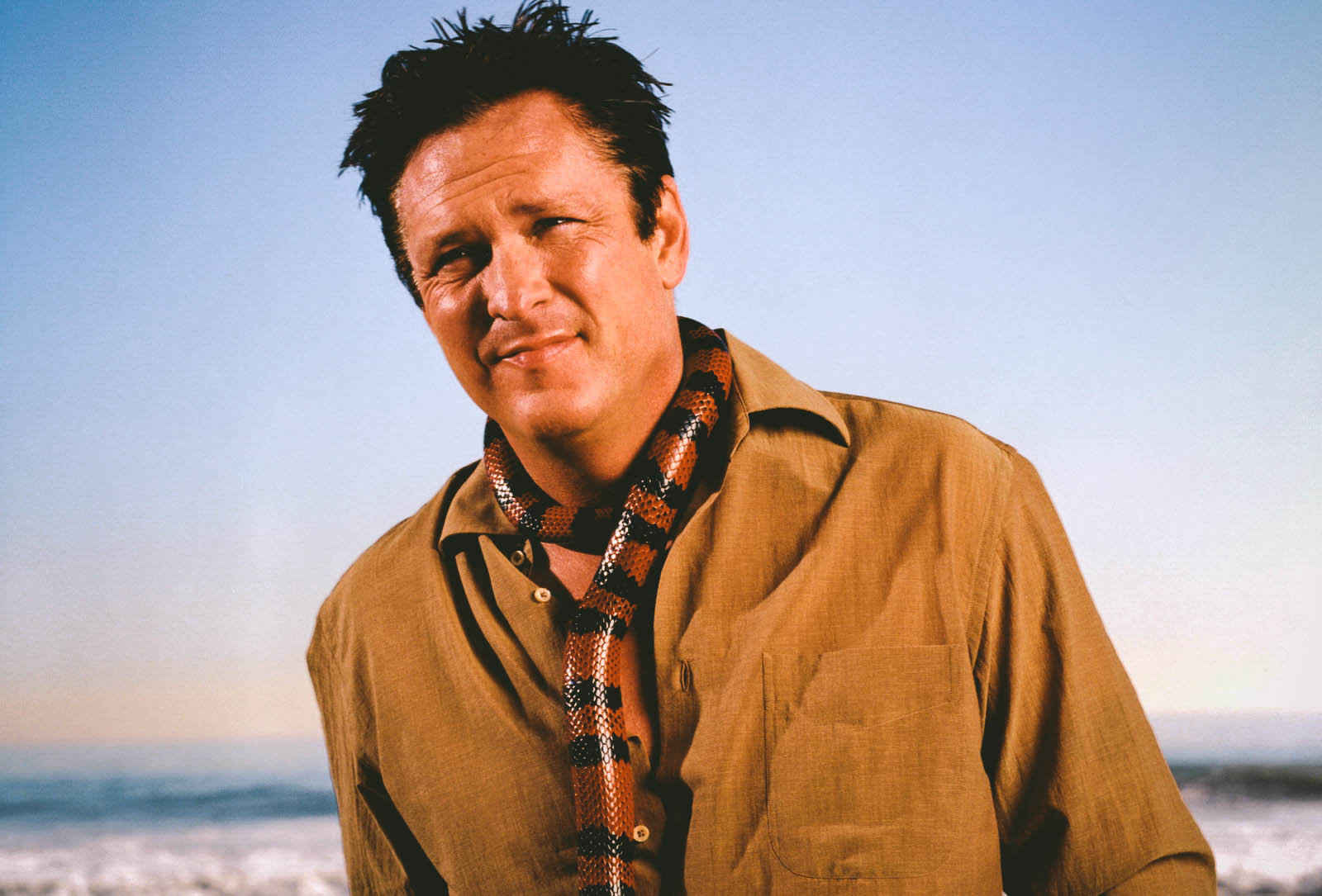 In the span of just one year, Michael Madsen went from an orca-sympathizing father in Free Willy to an ear-chopping lunatic in Reservoir Dogs. He disappeared into each role, and we say that with high praise. How many other actors could pull off such a transition? The list is short.

The easy-to-talk-to, free-wheeling Madsen admits that Quentin Tarantino gave him his career—his roles as Mr. Blonde in Dogs and Budd in Kill Bill have attached a “tough-guy” image, but it’s one he doesn’t seem to mind much. He never expected this to be his life’s work, anyway. (More on that below.)

When you separate the man and the actor, you see a regular guy from the South Side of Chicago who’s a father and lover of cars. Earlier this week we learned just that, plus got to chat with Mr. Madsen on all things Tarantino, Caddys, and hot sauce. 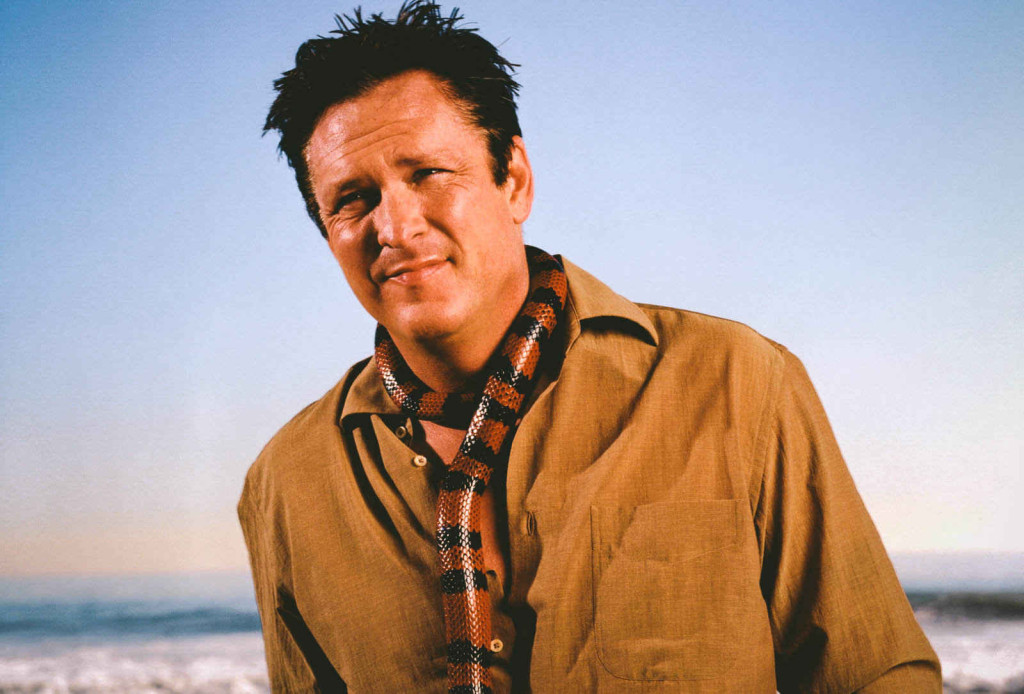 You have a reputation of being a tough guy. Were you born “tough,” so to speak?
“Born tough.” Sounds like the name of a book or a movie. I grew up in Chicago and my dad was a firefighter and my mother was heavily into the arts. South Side of Chicago is certainly not Mr. Roger’s Neighborhood, so I guess I had to put up with a certain amount of the environment, but you know, I’ve never been the kind of guy who walks around looking for trouble. I’m not like that.You do a picture like Reservoir Dogs and it becomes part of your life. It’s like Kill Bill. It becomes part of people’s minds and there really is no escaping it. I’m the dad in Free Willy, but people tend not to remember that or want to discuss it. It’s funny, I mean, I am a father. I have five sons. I have my own set of values, but the actor is one thing and then the man is something else.
You’re a big car guy. What are some of your favorites?

When I was growing up a lot of the “cool” guys in school whose parents had money were driving around in their Trans Ams and their fancy hot rods. Me and my buddies were building Road Runners and Super Bees in our backyards. I was a Dodge boy. I mean we had grocery-getters. We were swapping motors with each other, swapping out transmissions from everything in a Plymouth and a Dodge interchangeably. That was my thing. I never really wanted to be a movie actor…Richard Petty was my hero.

Chicago is certainly not Mr. Roger’s Neighborhood, but I’ve never been the kind of guy who walks around looking for trouble.

When I became successful in acting and wasn’t making $2.50 an hour pumping gas, I went and built a ‘57 Chevy and it had a dual quad with the hood out. I got a ‘67 Stingray. I went through a couple of cars that I’ve always dreamed about. I had a ‘67 GTO—that was a beautiful, beautiful car. I was the original owner. I sold it recently. I’ve gotta say I like the Dodge Super Bees. I like the ‘69 Super Bee with the 440s, pistol grip shifter, and I like Corvettes. I like the older Stingrays, ‘67 and ‘68. The 427 Stingrays are pretty fu*king cool, man.
Allegedly you used to drive the yellow Cadillac that Mr. Blonde drives in Reservoir Dogs. Do you still have it?Yeah. It was my car to begin with, my daily transportation. I bought that thing at a gas station from a woman while pumping gas in Beverly Hills. I had that car for a long time, and I had driven it to work that day. It was in the parking lot right outside the warehouse where we were shooting. They were gonna go to Budget Rent a Car and get a car for Mr. Blonde, and I said, “Wait, wait, wait..let’s use my car!” So that’s why it’s in there. But I still have it. I gave it to my older sister, and she kept it in her garage in Wisconsin for ten years. When I got it back, it had flat tires, and rats had eaten its interior. But I still have it.
Can you pinpoint another scene from a Quentin Tarantino movie that’s stuck with you?The thing that snaps into my brain when you said that is…you know in Kill Bill, I had that white Stetson on? That white cowboy hat? Well, I had been in Durango, Colorado, making a western called Renegade, originally called “Blueberry”.I had just finished it right when I started to do the table readings for Kill Bill. I had just come back, and I brought that hat. So when I started doing the readings, I was wearing that hat. Quentin pretty quickly told me that he didn’t want me to wear it. He said, “You’re not wearing that hat.” I really wanted to, because I had the character of “Budd” in my brain, and I kind of figured what I wanted to do and how I wanted to look.He wanted me to cut my hair too. It took me a couple of days of getting used to him seeing me like that, and I was just hoping that he would eventually agree with me. He did, and I ended up doing it like that. But the funny thing was that when we started the movie, the first couple of scenes we shot were the scenes in the graveyard. I was getting buried. I got to do a bunch of stuff in the hat, and that was great.

Right, but then…Then when we went out to shoot the strip club, [QT] handed me some hand-written scenes where he tells me to take off the hat. So you see, it was never in the script. It was never in there to begin with, but once I wore the damn thing, he wrote a scene where I had to take it off.  It really kind of sums it up. I mean that’s the kind of genius that he is. He knew that I, Michael Madsen, wanted to wear the hat. So he let me wear it, but when he wrote a scene where I had to take it off, well, then I had to take it off! It wasn’t a debate anymore, but he realized that taking off the hat would emotionally show on screen in my character.Because I’m not that good of an actor, I couldn’t have pretended, ‘Oh, I don’t want to take this hat off.’ I didn’t want to take it off. You can see it on my face. That’s the thing with me and him. He really knows how to get me to come across in a scene, and he knows what to do to make it happen.

That’s the kind of genius that Quentin is.

That scene turned out to be kind of an interesting moment for Budd, because he feels real bad when he takes that thing off, you know? It gives his character a conscience. It actually makes him likeable in a really strange way. Considering the things that Budd does, the fact that you actually like him because you feel sorry for him because he had to take his hat off is really kind of mind-boggling.

There’s been rumors of you guys wanting to do Double V Vega, which would be you and John Travolta as brothers. Was that was axed?I went to the Cannes Film Festival a few months ago and met John for the first time. He was sitting with Quentin and a few other people. I walked up to the table and said hello, and John stood up. When the two of us were standing together, I think there was a general feeling of what an interesting notion it would be for us to do the Vega brothers. I know it’s something that has been in Quentin’s mind for years, and mine too. I don’t know, I think the two of us would be pretty interesting together.
What’s something you can’t live without?Well I sure as hell can’t live without my motorcycle. I have a red Chopper. It’s a hard tail frame with a shovelhead motor on it. It’s a Harley Davidson. I like a Chopper bike. I like a custom bike. I have a 60 pan shovel, and I’ve got the Hell Ride bike. I’ve had bikes since my dad bought me a little mini bike when I was ten years old.

What’s your biggest vice?Wow, that’s a big one. It’s funny, the answer to that question would change like four times over the years. I would say…I don’t have any negative vices. I’m not running around doing any bad things anymore.

I gave the car to my older sister, and she kept it in her garage in Wisconsin for 10 years. When I got it back, it had flat tires, and rats had eaten its interior.

We guess that’s one way to live your life.

Well we can put it this way: I’ve had a lot of them over the years, but right now, I’m vice-less.

You have a hot sauce label. What’s your favorite thing to put it on?Oh yeah! American Badass. I make American Badass hot sauce and American Badass mustard. They’re for sale in the market right here in Malibu, and it’s at a restaurant on the hill called Christy’s. This gal from Hawaii has a nice little breakfast place out here and they have it on the tables. I have a website and everything. I’m hoping that it’ll catch on. I’d love to have a hot sauce empire.

How does it make you feel that anytime we hear “Stuck in the Middle With You,” it makes us think of you cutting off that dude’s ear?Well I’ll tell you the true story. When we shot that picture, that scene was going to have The Punishers. It was gonna be “Ballroom Blitz.” Quentin did not have the rights to “Stuck in the Middle.” But when we shot that scene—we did that four times, from like four different angles—I knew that he really wanted “Stuck in the Middle,” and so I actually sang it in the wide shot. I sang it to a play-back because they had a boombox on the set and they played it for me. But the truth is, we didn’t actually have the rights until later.

I’d love to have a hot sauce empire.

One last question and we’ll let you go. What does America not know about you?

I feel lucky and I’m very conscious of being lucky. I say my prayers at night. I’m a complicated cat. I’m bewildered how I got into the film business. I mean, I’m a juvenile delinquent from Chicago. I was a blue collar kid, and I loved movies. The chances of me being able to do this were probably a billion-to-one.

2 thoughts on “MICHAEL MADSEN ON CARS, TARANTINO, AND HOT SAUCE”