Michael is an accomplished poet and has a international following, his first book Burning In Paradise won the Independent Firecracker Award in 1998 and was recently translated in Norwegian in 2008. He has been recognized worldwide as a poet and invited to the International Poetry Festival in Genoa, Italy and Mexico to be honored for his Bukowski style poetry. The Complete Poetic Works of Michael Madsen, Vol. I 1995-2005 (C. 2005 13 Hands Publications) is the only authorized book of Madsen’s poetry dating up to 2005 and Signs of Life (C. 2006 13 Hands Publications), dedicated to Chris Penn was Michael’s first ever book of photography. His recent appearances have been on The Today Show, Larry King Live. American Badass (C. 2009 13 Hands Publications)book was released in September 2009 and is available on Amazon.com; he dedicated this book to the memory of the late David Carradine, his friend and Kill Bill co-star.

Madsen was most recently the Guest of Honor at the 2010 Crossing Border Festival in The Netherlands. His latest release is “Expecting Rain” (C. 13 Hands Publications) which includes an Introduction by Jerry Hopkins (Co-author of “No One Here Gets Out Alive” the definitive Jim Morrison bio). This book is dedicated to the late Dennis Hopper and includes a special Q & A with Michael and never-before-seen photos. 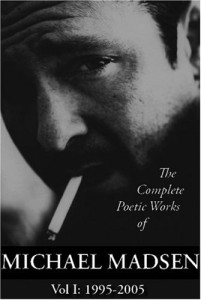 This 10 year Anniversary Special Edition of Michael Madsen’s poetry is six books in one: The Complete Works includes previously unavailable books: “Beer, Blood & Ashes,” “Eat the Worm,” and “Burning in Paradise”–plus, now out of print “A Blessing of the Hounds” and “46 Down: A Book of Dreams & Other Ramblings,” in addition to new selections from “When Pets Kill,” with over 50 photos. 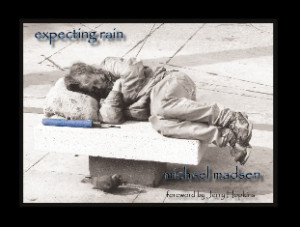 Michael Madsen has been gaining ground since 2005 as a true rebel poet in the style of the classic beats and Charles Bukowski. His books have been an international success. Expecting Rain is his forthcoming work once again blending poetry and original photography and classic, never before seen, images from Michael Madsen’s films. This book will be dedicated to the late and iconic Dennis Hopper. Intro by Jerry Hopkins. Jerry Hopkins is an American author and journalist. 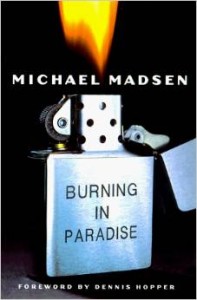 Actor and writer Michael Madsen is best known for his roles in Reservoir Dogs, Donnie Brasco, Thelma and Louise, The Getaway, and dozens of other films. In Burning in Paradise, Madsen’s poetry explores the intense and gritty experiences of a man living life on the edge. These highly readable prose poems take us behind the scenes of Madsen’s life, from the bedrooms and barrooms, hotels and jail cells, to the car wrecks and countless movie sets all over the globe. From his childhood in Chicago to his legendary excesses in Hollywood, his writing is stark yet vivid; he’s been “sewn up, blown up, x-rayed, drugged up, tied up, and locked up”. 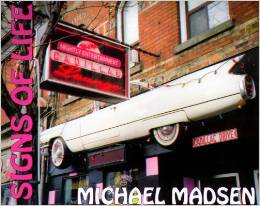 SIGNS OF LIFE is actor/poet Michael Madsen’s (Reservoir Dogs, Kill Bill, et al) first book of photography that chronicles his eye for the unusual: from the hotels, diners, and hip lounges to the vanishing small shops and businesses that have become an endangered species in today’s sea of corporate logos. This book also captures the rusted, abandoned symbols of where life once was, hence the other signs of life. From cool haunts in Toronto such as: The Cadillac Lounge and The Silver Dollar Room, to the chilling and tragic locals of Texas to Terezin and the immensity of Bejing’s Great Wall of China.

American Badass follows the success of The Complete Poetic Works of Michael Madsen, Vol I: 1995-2005 (c. 2005 13 Hands Publications) and Signs of Life ( c. 2006 13 Hands Publications). This is Madsens anticipated eighth book of new poetry selections which features never before seen candid celebrity shots and badass photos from his movies off and on the sets. Madsen dedicates this book to the memory of his friend and Kill Bill co-star David Carradine. 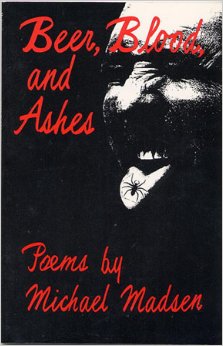 Review: Okay, here is a collectible for all lovers of Michael Madsen films or poetry! His first book of poetry, tres rare, first edition. I don’t really know poetry that well, but what I have read looks terrific. And this is Mr. Michael Madsen, the actor, folks! Very collectible and hot!!

And he had the taste to do this up right: slick covers, great design, bright white pages.